We’re committed to improving the lives of the children through education and a higher standard of living.

We’re small and uniquely different from larger charities operating here in Africa. We pride ourselves on being able to show our visitors and donors exactly where their money is being spent. We have the advantage of being able to spend the large majority of donations received directly on the children and their educational needs.

The loss of one parent in Uganda is tantamount to orphanage, the loss of one or both parents typically causes severe limitations on the ability to generate income. In turn this has a significant, negative impact on the well-being and social mobility of the child. A child who has lost one parent is referred to as a ‘single orphan’ and a child who has lost both parents is referred to as a ‘double orphan’.

Where possible orphans are brought under the care of a relative and this arrangement is facilitated and managed by Little Angels Uganda.

Little Angels needs all the help and support we can get, we can do so much with so little and you can be a part of that.

We have 4 classroom blocks harbouring P1 to P7 classroom. These have 40 children per class.
We now have 2 dormitory blocks, 1 for the girls and the other for the boys.
We have ‘squire’ a project motorboat which can carry 100 children per trip (all with life jackets).
We now have 16 teachers in our classrooms, after starting in 2011 with only 2.
In 2018 we introduced an official Little Angels uniform. It makes the children very proud to be wearing them.
We’re now feeding over 500 families around Lake Bunyonyi during the current COVID-19 crisis.
We have now built 6 new homes for some very needy families (homeless) in our community.
We support over 30 children who have finished primary school and have moved on to secondary and vocational schools.
We have bridged the gap of 6 children and their adopted families in different countries.
We have acquired 2.6 acres of land on which we are going to construct new permanent structures for the project.
We have a Little Angels office for administration and where most of the updates are conducted for our sponsors and donors.
We are now teaching computer classes to the children at Little Angels.
We have currently released 3 candidate classes (P7), each year has 40 candidates, with 30 passing highly in 1st and 2nd grades every year.
We now over 100 children in secondary schools all over Uganda who are still being supported by our sponsors.
Previous
Next

Born on the 12th day of January in 1988 to very humble parents Mr and Mrs Turyahumura. Duncan Musinguzi grew up struggling and trying hard to stay in school. Being the first born in a family of 5 siblings (4 sisters and 1 brother) he was forced to make ends meet at an early age. 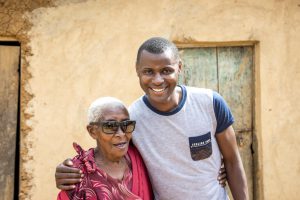 He later met a British couple which after a few words with him noticed how brilliant a child he was and decided to sponsor him at the age of 14.

Wanting to make his parents proud, Duncan excelled in class and successfully completed High School, but in the back of his mind he had an ambition of completing further studies to become a medical practitioner. However, after High School his sponsors were unable to continue supporting him financially, so his dream of becoming a doctor could not be achieved as he could not afford the tuition costs. Instead of being disappointed, Duncan wanted to show his appreciation to his sponsor by giving back to his local community, doing what had been done for him, but in a bigger way.

At just 24, Duncan started the Little Angels project for the orphans and needy children who were from financially disadvantaged backgrounds and provide them with opportunities.

Duncan is now a father of 3 children, 1 being adopted.

Having been given an opportunity tp succeed in life, Duncan was instilled with a manner and the heart to give whenever he can.

“Blessed is a hand that giveth” is a saying Duncan continually expresses and forms the foundations of the life he continues to live.

Our children in need

It is our mission to do anything we can to help the needy children. There are a lot of kids without anyone to look after them in the world. We believe God loves them and we love them too.

Everyone can help a Little Angel by donating money, donating goods, visiting us, writing a letter to a child, volunteering with us, there are soo many ways you can help change a life for the better.

Learn how you can help

Of the 282 registered children (3–14 years) at Little Angels Uganda:

All primary age children are attending school, but your help is needed to ensure the children all continue to stay in school. Little Angels has so far registered 160 girls and 122 boys, 5 of those are children with special needs.

Little Angels Uganda has both nursery and primary school. We also have primary 7 which is the last class in the primary education system of Uganda, this class offers the children the chance to qualify to go to secondary/high school.

Little Angels Needy Children & Orphan Project does not currently have the capacity to house the orphans in a purposely built dwelling. They are housed amongst the community under the care of registered guardians, unfortunately there is no electricity or running water as the Mwendo area does not have infrastructure to support this.

The Little Angels orphans and needy children live in very poor conditions. Most children do not sleep in a bed at night. Some children sleep on a mat on the floor while others sleep directly on the floor. Provisions of mattresses, beds and bedding will significantly improve the living conditions.

The Little Angels Needy Children & Orphan Project beneficiaries are subject to near-universal poverty conditions. Despite being preventable through adequate nutrition; conditions including Marasmus, Kwarshiokor, and stunted growth are highly prevalent. Very few (if any) of the needy children under Little Angels Needy Children & Orphan Project care can afford to eat breakfast, lunch and dinner.

Sweet potatoes, beans and Irish potatoes are the staple elements of the needy children’s diet.

Diseases pose a significant threat to the needy children of Bufuka. AIDS is the underlying cause of much of the orphanism across Africa. Education programmes are having a positive impact on the rate of HIV infection. This education reinforces the need for preventative health in response to the threat of vector-borne diseases such as malaria and transmittable diseases such as HIV/AIDS.

All Little Angels children are living significantly below the poverty line. As well as malnutrition, some children have to sell labour (work) to buy scholastic materials. This can cause constant absenteeism and eventually they cannot keep pace with their school work. Typically they drop out of school or have to repeat the grade. Some girls and boys reach age 17 or 18 while still in primary school due to academic failure caused by attempting to work to pay for school fees and complete their schooling at the same time.

“The work Duncan and his team are doing with the Little Angels Project is truly inspiring. He and his team are such an inspiration to needy children, the wider community, and to all tourists who are fortunate to visit the project. They should be extremely proud of themselves.”

“Once witnessing such amazingly, glorious acts of passion towards the unfortunate opened my eyes to an amazing opportunity I could not turn from. From that moment onward I began to do what I could, with what power I had to help these amazing children by any means I had available to me. Such an honor!”

This website uses cookies to improve your experience. We'll assume you're ok with this, but you can opt-out if you wish.
Do not sell my personal information.
Cookie SettingsAcceptReject
Manage consent

This website uses cookies to improve your experience while you navigate through the website. Out of these, the cookies that are categorized as necessary are stored on your browser as they are essential for the working of basic functionalities of the website. We also use third-party cookies that help us analyze and understand how you use this website. These cookies will be stored in your browser only with your consent. You also have the option to opt-out of these cookies. But opting out of some of these cookies may affect your browsing experience.
Necessary Always Enabled
Necessary cookies are absolutely essential for the website to function properly. These cookies ensure basic functionalities and security features of the website, anonymously.
Functional
Functional cookies help to perform certain functionalities like sharing the content of the website on social media platforms, collect feedbacks, and other third-party features.
Performance
Performance cookies are used to understand and analyze the key performance indexes of the website which helps in delivering a better user experience for the visitors.
Analytics
Analytical cookies are used to understand how visitors interact with the website. These cookies help provide information on metrics the number of visitors, bounce rate, traffic source, etc.
Advertisement
Advertisement cookies are used to provide visitors with relevant ads and marketing campaigns. These cookies track visitors across websites and collect information to provide customized ads.
Others
Other uncategorized cookies are those that are being analyzed and have not been classified into a category as yet.
SAVE & ACCEPT